Posted at 22:06h in Must See by Dordogne Valley Travel

A majestic volcano with breathtaking views

The Dordogne Valley begins at the Puy de Sancy, a majestic volcano rising above a vast mountain landscape. At 1,886 meters, it is the highest peak of the Massif Central and the tallest volcano in metropolitan France.

At the foot of its northern slope, two babbling streams, the Dore and Dogne, meet to form the Dordogne River, which then begins its 472-kilometer journey to the Gironde estuary and on to the Atlantic Ocean.

Not to worry though, the Puy de Sancy volcano, along with its rumbling and spewing companions, erupted for the last time around 250,000 years ago, leaving behind tall mountains and layers of lava that have since been carved by glaciers and erosion to create a landscape of stone peaks, sharp crests, glacial cirques and deep valleys, softened by vast plateaus and the peaceful serenity of crater lakes. Rivers, streams and plunging waterfalls animate this natural mosaic, along with the rich animal and plant life that flourishes here.

Imagine waking up to an early morning hike, breathing in the crisp air and marveling at the beauty of this landscape under the pink light of dawn. Or the exhilaration of skiing down a mountain, or cross-country through the woods, in the scintillating white backdrop of winter. The Sancy Massif indeed offers a myriad of summer and winter outdoor activities for hearty athletes and weekend strollers alike.

You will of course not want to miss venturing to the top of the Puy-de-Sancy, which you can reach by foot up a steep trail, or by cable-car for a less strenuous ascension. In both cases, you’ll have another 864 wooden steps to climb, but the breathtaking 360° panorama from the top of the Massif Central, and the exhilarating sense of freedom as you gaze across the vast mountain landscape, is certainly worth it!

A winter and summer sports paradise

And if hiking is your thing, well… this is paradise! There are hundreds of kilometers of well-marked trails for both avid and leisurely walkers of all ages, levels and interests. Whether you prefer strolling among wildflowers and waterfalls (don’t miss the Grande Cascade!), or challenging yourself with steep, rocky ascents, you’ll find it here. In the warmer months, you can also enjoy trail running, tobogganing, climbing, horseback riding, mountain biking, fishing, golfing and more.

The area is also renowned for its winter sports. At the Mont-Dore ski resort, one of the first in France, you’ll find 84 km of downhill slopes for all levels and styles, even Free Riding. Add 250 km of trails for cross-country skiing and snow-shoeing, plus ice-skating, ice-climbing and winter hiking, and the Sancy Massif becomes a year-round sports paradise!

After a day on the summer or winter trail, you can wind down in the warm and lively village of Le Mont-Dore or the relaxed town of La Bourboule. Both of these historic thermal spa towns are known for the charm and elegance of their Belle Époque architecture. They also host many concerts, plays, outdoor markets, and other events year-round.

Each year, from June to September, selected contemporary artists from diverse horizons (plastic arts, architecture, design, landscape design) install their original creations in the grandiose and challenging settings of the natural landscape of the Sancy Mountains—on the top of a volcano, in the middle of a lake, next to a roaring waterfall…

For art lovers, hikers, or the simply curious by nature, young and old alike will surely be intrigued, and perhaps moved, by this imaginative melding of art and nature.

The artworks can be seen from footpaths around the Sancy Massif. A free map is available showing the exhibition locations, or you can have a guided tour. 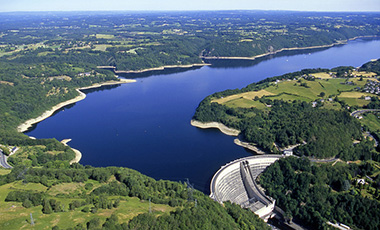