12 Jun Enjoy the Food Markets & Produce of the Valley

Posted at 18:13h in Must See by Dordogne Valley Travel

Few aspects of our local lifestyle are more important to both residents and visitors alike than the really good food and wine available everywhere here.

You can find it on food markets stalls, in simple country inns or village bistros, brasseries, or establishments with Michelin stars.
It all starts literally at ground level, in fields, orchards and vineyards, where produce of the highest quality begins its life. Many of our products have official quality certification such as AOP, AOC or Label Rouge.
They are all to be found at the numerous markets which flourish in this area. Towns and many villages have once or twice weekly markets throughout the year; whilst in summer, local Farmers’ Markets, where you can sometimes stay and eat, spring up in many places.

In summer, local farmers’ markets are a great opportunity to meet local farmers and find out about the rich and diverse produce of the Dordogne Valley, from fruit and vegetables to conserves, pâtés and jams. Only producers from the surrounding area are allowed to have stalls, and there is usually a festive atmosphere, with the opportunity to stay and make a meal from the products you have bought. 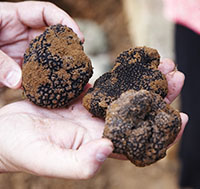 Hidden underground beneath the trees, the highly prized black truffle, or tuber melanosporum – also named ‘black diamond’ – is a mushroom that has to be hunted out. It likes alkaline soil, and the limestone rock of this area is its ideal terrain. Pigs were once used to hunt them out, as they have a very acute sense of smell and naturally root for them; but as pigs aren’t always the most amenable of creatures (given half a chance, they’ll snaffle the mushroom themselves), trained truffle hounds now usually do the job. You can find this supreme delicacy in the markets from December to February every year, in particular those in Lalbenque, Sorges, Saint-Alvère and Périgueux. 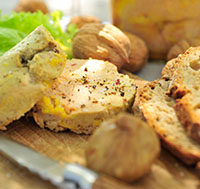 In the Dordogne Valley, the duck and goose bring a special note to the table. The fattened birds (not force-fed, as such; the food goes into a storage pouch, the crop, and they digest it as and when they want) give liver for foie gras and meat for confit, magret, etc.
Foie Gras is a real delicacy, prized and enjoyed by the local population. There are over 60 producers, farmers, artisans and canners who control the quality and provenance of their product via the ‘Canard à foie gras du Périgord’ PGI (PGI stands for Protected Geographical indication).
The confit is an ancient method of preservation: the meat is salted, rinsed, and cooked very gently in its own fat until tender and then, most often, stored in tins. It is traditionally served with pommes Sarladaises, potatoes sautéed in the fat of the bird which has been used to preserve it. 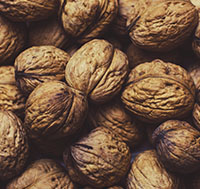 The ‘Noix du Périgord‘ originally came to the area with the Romans, but has made itself thoroughly at home here, and walnut groves are to be seen almost everywhere, throughout the Corrèze, the Lot and the Dordogne (Périgord is the old name of the Dordogne department).
Very good to garnish salads and accompany cheeses, walnuts are sold in the shell but also transformed into delicious cakes, biscuits, confectionaries and an excellent oil. They are also distilled into liqueurs, spirits and a fine, local aperitif, ‘vin de noix’ (walnut wine). 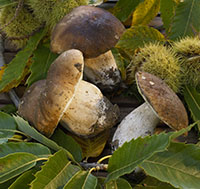 The soil and climate of the Dordogne Valley favour gastronomic mushrooms which grow above ground and in season, conversation among the locals focuses on who has found the first cèpes and girolles. 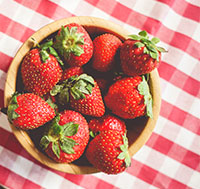 Known for nuts, the Dordogne Valley is a horn of plenty also providing a wide diversity of fresh fruits, softly ripened under the sun.

Blueberries grow on the mountain slopes of the Cantal and the locals know just where to go to find them.
Apple orchards are abundant around Bergerac and the Corrèze is famed for two old varieties, the Reinette and the Sainte Germaine, the latter taking its name from the village of Saint-Germain-des-Verges where it was discovered 1750-1760.
Strawberries are another delight to be found on local market stalls. Around Beaulieu-sur-Dordogne in the Corrèze, 700 tonnes are cultivated each year, the stars being the delicate, scented Gariguette and Mara des Bois. The Dordogne is France’s biggest producer of strawberries and Spring is a time dedicated to various strawberry festivals held in the region.
Plums also grow locally. In Carennac – Lot – the Reine-Claude Greengage flourishes. This little queen has its own festival, in the summer! 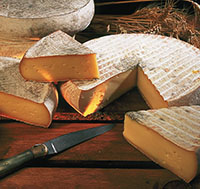 At the threshold of the Auvergne, the Dordogne Valley benefits from its rich pasture lands that produce exceptional cow’s milk cheeses.

40 cm in diameter, 40 cm in height, 40kg, Cantal is the oldest cheese in the world (eaten by the Romans!). Its peculiarity is that it is pressed twice; the milk curds are pressed before being churned, salted and finally moulded and pressed again. Depending on the time of ageing, three varieties of cheese are available on the market: young Cantal (one to two months), ‘entre deux’ (three to six months) and ‘vieux’ (over eight months). The latter may be recognized by the thickness of its crust and the color of its texture.

Unlike the neighbouring Cantal, Salers can only be produced from May to October. When clearly marked ‘Tradition Salers’, the cheese is made exclusively from Salers cows’s milk, while ‘Salers-Salers’ denotes that milk from other breeds may have been used. Whatever the label, Salers remains exclusively a farm-made cheese.

Bleu d’Auvergne would not have come to light were it not for Antoine Roussel, a young trainee pharmacist who left his native Auvergne to work in Rouen. It was here, in 1854, that he perfected the art of the blue mould character of this cheese, a secret which is now handed on from producer to producer. A century and-a-half later, this blue cow’s milk cheese is a must for those who like pronounced, aromatic flavours.

Well known for its soft and supple interior, this robust rustic cheese was introduced to the table of Louis XIV by Maréchal de la Ferté-Sennecterre. The appellation zone of Saint-Nectaire, located in the heart of the famous Auvergne volcanic chain, is one of the smallest in France although one of the most famous. Matured for four to six weeks and with an orange or grayish rind, Saint-Nectaire never fails to make an impression. 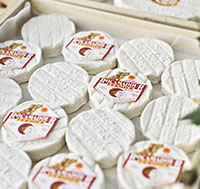 With its karstic plateaus, the Dordogne Valley is the land of goats. Their milk is used to produce a unique cheese called: the ‘Cabécou‘, which means ‘little goat’ in the ancient local ‘langue d’Oc’ language.

Rocamadour cheese has been recognised as a PDO (Protected Designation of Origin) since 1996. This small, flat, round and creamy cheese is part of the ‘Cabécou’ family and owes its name to the village situated in the centre of the Appellation area. First mentioned in the 15th century, it was in fact called ‘Cabécou de Rocamadour’ before the name was shortened quite simply to ‘Rocamadour’.
Very mild and creamy when young, it gets stronger and drier when allowed to mature. Rocamadour is irresistible when thickly spread on a lightly toasted piece of bread and served with some honey, in salads with walnuts, or even warmed. 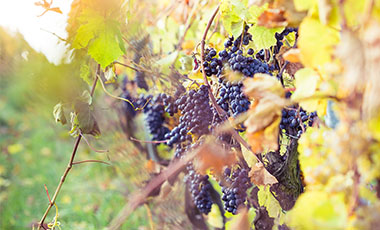 LEARN MORE
The wines of the valley 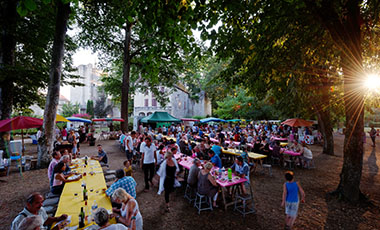