16 Nov Dams and lakes along the Dordogne River

Posted at 15:49h in Must See by Dordogne Valley Travel

Harnessing the power of the Dordogne River

The power of the water flowing through the Dordogne Valley has been harnessed to produce electricity, creating magnificent dams and lakes, many of which are open to the public.

There are ten dams on the Dordogne River, all of which are used to produce electricity and control flooding. Their beautiful lakes offer many outdoor activities for old and young alike, such as swimming, skiing, paddle-boating, paddle-surfing, hiking and fishing. Or you can just hang out on the shore with a nice picnic. And many of the dams offer spectacular views of the surrounding landscape!

Learn about their history, architecture and impact on the natural environment

Nine of these dams have visitor centers where you can learn about their roles in the production of electricity and their impact on the natural environment, as well as their history and how they work.
Here are just a few examples.

At 120 m high, the Bort les Orgues dam in the Corrèze is the largest in the Dordogne Valley and the fourth largest in France. Its lake is also one of the largest in France. In its visitor center, you have a great view of its hydroelectric machine room and how it works, and you can learn about energy conservation and environmental protection measures as well.

Further downstream, at the border between the Corrèze and the Cantal, the Barrage de l’Aigle (The Eagle dam) is also known as “the barrage of the resistance.” Its construction from 1935 to 1945, during World War II, was deliberately delayed by the Cantal armed Resistance to avoid providing the Nazis with additional energy. This dam also has a very original architecture and impressive dimensions: 290 meters long and 90 meters tall!
In addition to showing you how the hydropower system works, a replica of a “dam builders shack” shows you the daily life and working conditions of early dam builders. Several models of the site show you the evolution of hydroelectric facility construction techniques.

At the Tuilières dam, near Bergerac, you can witness a unique experiment to help migrating fish, such sturgeon and salmon, make their way upstream to reproduce. This is a “fish lift” that captures the fish in a tank and then rises to discharge them on the other side of the dam! Fish lifts and ladders at dams are essential to ensure the survival of many species. In the visitor center, you can learn about the migrating fish, as well as the history of the dam and powerplant, and how it works.
The lift even has an observation window where you can see the fish going through. It is accessible 24/7, but it might be kind of spooky in the dark!

In France, dams are sometimes called “concrete cathedrals,” evoking their monumental and majestic architecture. And none can deny their essential role in our daily lives, past and present!

For an unusual way to discover the dams in the Corrèze department, there is a hiking and cycling itinerary that leads you to them, and many beautiful villages, along the way. 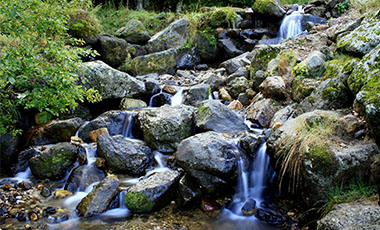